At the start of July, heralded by a morning of decibels, the Viking Fishbar disappeared into a pile of rubble behind blue barrier. 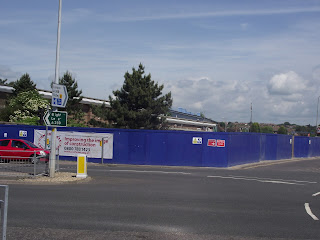 In years to come new residents will wonder why this junction is known as Viking Corner. It was sad to see it fall, though the space which  was revealed took us all by surprise. Now you can walk behind the Leisure Centre and see the site of the old High School. The local papers are talking of a new enlarged Leisure Centre, restaurants, a hotel. No-one has dared to suggest where the money for such a development might be found.

Back at Woodsgate Park, they have finally opened the new temporary footbridge. 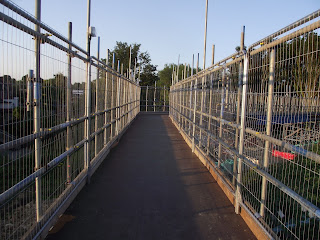 It sways slightly with heavy footsteps, balanced precariously on scaffolding overlooking the curve of the new road. 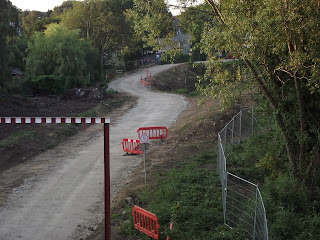 You can see the stream which is 'featured' on the new plans. It's a dirty brown colour and filled with examples of scrap metal. Even so the surrounding trees are impressive.

On the other side of the footbridge stands the old railway bridge. 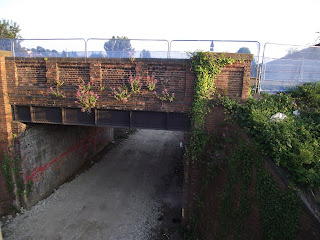 Take a long look.....it won't be around for much longer.